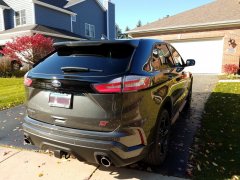 4WD vs. AWD -- a primer on the differences

By Jombi, January 14 in All Wheel Drive (AWD)